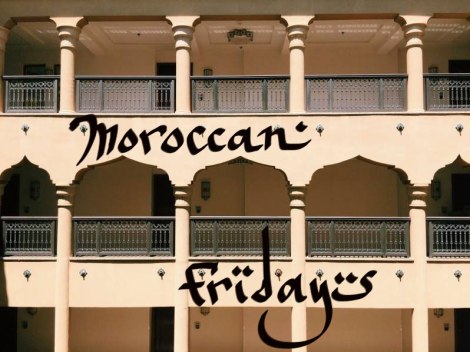 Salam Aleykoum! This post is part of the Moroccan Fridays series in which I aim to shine a light on the country I grew up in. The series strives to explore various topics, swaying between reality and legends, geographical wonders and curious traditions. 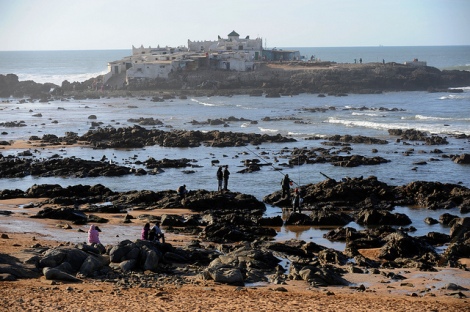 The rocky islet by Mustapha Ennaimi

As a child, I never knew what the Marabout de Sidi Abderrahmane was. Standing proudly on a rocky islet overlooking at the vast Atlantic, this small piece of land is enshrouded in mystery. At first sight, it may appear like a cluster of white houses cut-off from the shore of Casablanca but there is more than meets the eye.

Before 2013, the marabout was only accessible at low tide. Mum and I would sometimes spend early Sunday mornings by the shore, wading in the water amongst the rocks, picking razor clam and mussel shells, competing to find the rare kinds of abalone shells – the ones with the iridescent, rainbow-like insides.

In 2013, a stone arch bridge was built. This facilitates the access to the marabout and turns a sanctuary into yet another tourist attraction… But I’m getting ahead of myself. 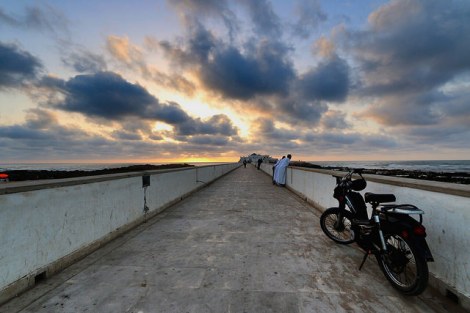 The bridge at Sidi Abderrahmane by Amina Tagemouati

The marabout is amongst the most visited in Casablanca and yet… the history of Sidi Abderrahmane appears to be vague and very little is known about his life.

Some say Sidi Abderrahmane came from Baghdad in the 18th century. They say his boat ran aground on the Plage Aïn Diab, once an untouched beach, now a neighbourhood brimming with trendy restaurants, bars and hotels with luxurious swimming pools. A pious and humble man, Sidi Abderrahmane took up residence on the coast of Aïn Diab where he prayed and welcomed people in need of advice and healing.

Others claim he was an illiterate man. They affirm he was incapable of learning the Koran verses and thus retired on the rocky islet to praise God with his lute. He was indeed known as Boumezmar – the man with the lute. 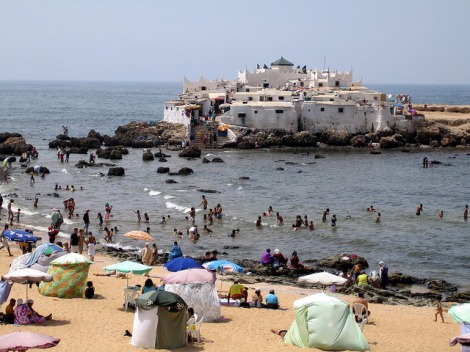 It is said that Sidi Abderrahmane was a hermit and a saint. One who had “baraka” (blessing ) and the miraculous power to walk on water. Women from all over the country went on a pilgrimage to be cured from infertility or heartache. He was also known to heal those who suffered from a curse or mental illness. After his death, the Sayyed was buried on the island and during the French Protectorate, the rock was proclaimed a marabout.

Today, the island resembles a miniature city. It consists of a few whitewashed houses with blue shutters and a mausoleum that comprises two tombs – that of Sidi Abderrahmane, shrouded with a green fabric (the traditional colour of Islam), and that of his loyal servant.

But the island holds more secrets. There is another place behind the mausoleum, a place that welcomes the “possessed”, those who come bringing offerings, appealing to the Sayyed to be delivered. After immolating a sheep or a black billy goat, the patients are locked in a chamber where they are washed with the seven waves of the Ocean. Following their purification, they are showered with a blend of 333 herbs while their clothes are thrown away in the Ocean to exorcise the evil spell. 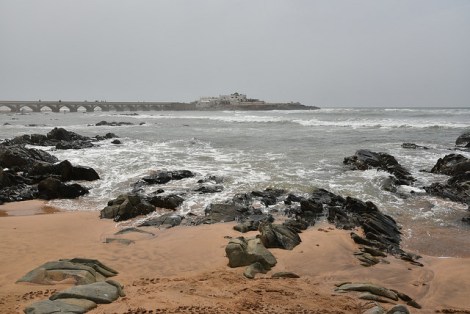 Yes, in the holy tomb of Sidi Abderrahmane, a peculiar odour lingers in the air. There is the salt, of course, the marine breeze, but  also another unmistakable scent, one that hints at the practice of witchcraft. Melted lead and incense. For the modest sum of a few dozen Dirhams, women of all age enter small barrack rooms where fortune-tellers read cards and whisper spells.

In Casablanca, those dream merchants are called chouafates. And although visiting them is haram (a sin), the business remains the most lucrative one in the marabout.

And yet, to the innocent eyes of the 10 year old I once was… the marabout de Sidi Abderrahmane was only a faraway island. The only interesting activity I was aware of at the time was that of collecting sea shells and pretending my nails were as long as razor clam shells.

28 responses to “The mystic marabout of Sidi Abderrahmane. #MoroccanFridays”

Follow A writer's caravan on WordPress.com
Join 523 other followers